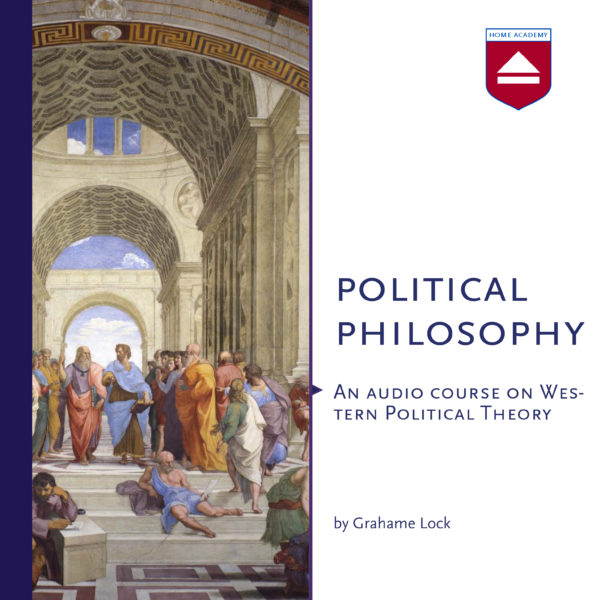 In this audio course Grahame Lock examines the major periods in the history of Western political thought and questions the political and social order. It considers the ways in which thinkers have responded to the particular political problems of their day, and the ways in which they contribute to a broader conversation about human goods and needs, justice, democracy, and the proper relationship of the individual to the state. One aim will be to understand the strengths and weaknesses of various regimes and philosophical approaches in order to gain a critical perspective on our own.

Plato, Aristotle, Augustine, Thomas
It has been said that all philosophy is a footnote to Plato. Ludwig Wittgenstein asked why: was Plato so very clever? Or is there another reason for the immense influence of the classical world on all subsequent European thought? What is the effect, in this connection, of St Augustine’s new, Christian doctrine of politics as a necessary evil? St Thomas, the maestro of scholastic ideas, has been interpreted as both backward-looking – he is a mediaeval Aristotelian – and forward-looking – he remakes Christian thought in an explicitly rational spirit. Why, and what, can we still learn from him?

Machiavelli, Hobbes, Locke, Rousseau
Machiavelli the Florentine is a provocateur of Realreal politik, who argues for the subordination of Christian morality to the effective if unwritten rules of the political game. Thomas Hobbes takes yet another step toward pure realism: man, he says, wants only to survive, to minimiseminimize pain and maximisemaximize pleasure. That is why he needs the security which only an all-powerful Leviathan can offer. John Locke, in contrast, makes a plea for a social contract that will establish a constitutional regime best capable of defending life, liberty and private property. Jean-Jacques Rousseau, in stark contrast, argues that the rich, defending their possessions, tricked the poor into agreeing to the wrong contract. We need a social contract of a completely new type.

Tocqueville, Marx, Freud, the Present Day
Alexis de Tocqueville visited America in the 19th century and was shocked by its democratic tendencies, which he thought would destroy civilisation-as-we-know it – and yet were unstoppable. Marx produced his well-known account of the rise and coming fall of the capitalist class: not so much a moral condemnation as a historical forecast. Was he right?

Freud, in his writings on social philosophy, exposed truths about the unconscious motivations of “”mass man”” and his irrational tendencies, lessons which are arguably more relevant than ever in our world of propaganda, spin, celebrity politics and perpetual war. Finally, we look at present-day currents in political philosophy. Are there any new ideas in the world?


H1. Plato – The beginnings: justice and the philosopher kings
H2. Aristotle – Happiness, politics and the telos of mankind
H3. St Augustine – The State as a necessary evil
H4. St Thomas – A rational Christian philosophy
H5. Machiavelli – Behind the scenes of the political game
H6. Thomas Hobbes – Why we need a Leviathan to rule over us
H7. John Locke – Life, liberty and estate
H8. Jean-Jacques Rousseau – The general will: a critique of representative government
H9. Alexis de Tocqueville -America and democracy: an aristocratic point of view
H10. Karl Marx – Class struggle and history
H11. Sigmund Freud – Why the masses love their leaders
H12. The present day – Contractualism, individualism and the dogma of our times

Prof. Grahame Lock studied at University College London, King’s College Cambridge, and the Ecole Normale Supérieure, rue d’Ulm, Paris. He took his PhD at Cambridge with the philosopher Bernard Williams. He taught political philosophy at Nijmegen and Leiden Universities, and also lectured in European philosophy at Oxford University. He was a member of the Council of the Collège International de Philosophie in Paris and was an honorary professor at the Universidade Lusófona in Lisbon. Among his publications are works on political theory and on general philosophy, including textbooks on the history of political ideas (with Herman van Gunsteren and Etienne Balibar) and a monograph on Wittgenstein. Grahame Lock passed away in 2014.